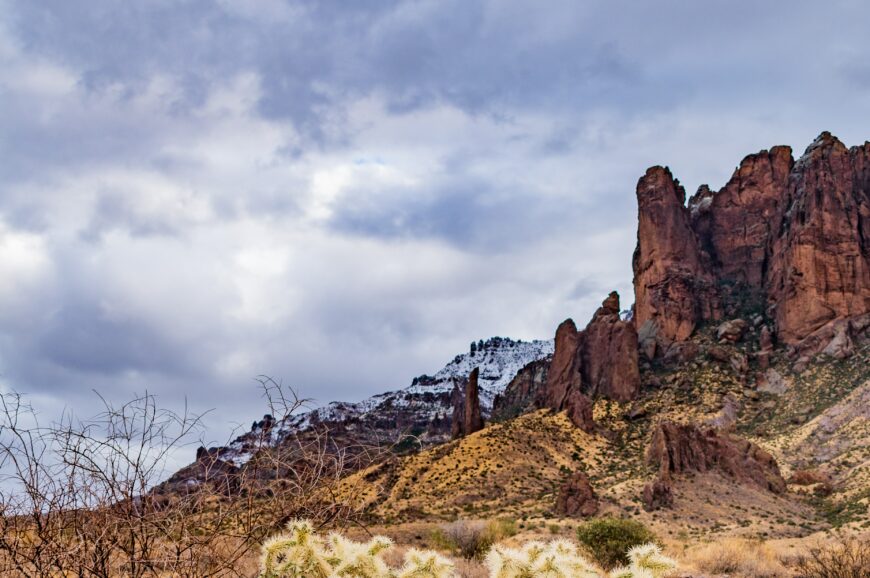 When most people think of Arizona, a few things come to mind: cacti, scorching temperatures, and rattlesnakes. But the Sonoran desert only takes up about half of the state, mainly the southern region. The northern half is full of grasslands, coniferous forests, and tundra. Tourists and ski enthusiasts flock to Flagstaff every winter to hit the slopes. Snowbirds pour into the Phoenix Metro Area from the Midwest to escape the harsh, freezing weather and take advantage of the milder climate.

From Mid-December to February, we have temperatures average highs of 60 to 70 degrees Fahrenheit, while the lows average somewhere around the 40s.

Phoenix sees a modest amount of rainfall in the winter months, the bulk of it occurring in January, February, and early March. The average rainfall is still very low compared to the downpours that happen during monsoon season, so the risk of flash floods is very low during the winter months.

“Arizona Cold” feels freezing to us…

You may hear this phrase occasionally, or see evidence of it if you visit Phoenix during the holidays. When the temperatures begin to dip down into the 70s, it feels chilly to those of us who were raised in (or have become acclimated to) the scorching 110+ summer days. You’ll start to see long sleeves and sweatshirts. December is usually the coldest and cloudiest month of the year, and as it gets closer to Thanksgiving, we’ll break out the coats and hats. 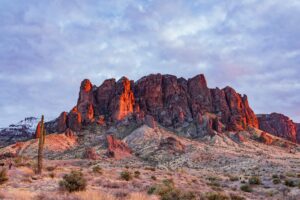 Every three to four years or so, we have a colder than normal winter, where the nighttime temperatures drop down into the low thirties. Freeze warnings are issued, and residents with gardens and outdoor landscaping scramble to cover their plants with sheets or towels to keep them from literally freezing to death. Fireplaces get heavy use during this time of year, as do fire pits.

Not helping things is the air: Phoenix winters often have extremely low humidity, and the dryness makes the air feel even colder and can wreak havoc on your sinuses if you’re used to a more humid climate. Pack some nasal spray or a neti pot just in case.

Heated pools are nice during the winter, but most pool pumps won’t operate if the air temperature drops below 49 degrees. This is by design, because the heat pump can become damaged or break if it runs in the cold. Your best bet is to head to the jacuzzi, if your property has one.

The high country(Show Low, Flagstaff, Snowflake, etc.) sees lots freezing temperatures and snow, and sometimes there’s so much of it the Department of Transportation will issue chain controls over the summit: if you don’t have chains or AWD/4WD, they won’t let you through due to the hazardous conditions and ice on the roadways. If the weather is particularly harsh roads may be closed, and you’ll be forced to turn around and head back down to Phoenix. Check the weather and traffic reports before you leave, and pack your vehicle with emergency blankets and supplies as a precaution.

Just because there isn’t snow doesn’t mean it’s warm! Even places at lower elevations, such as Agua Fria and Bloody Basin National monument, often drop to the 30s and 40s at night, and if the wind picks up it feels even colder. 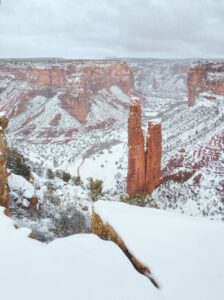 So what should we do if we’re visiting Arizona in the winter?

Check the weather reports to see what you might expect during your stay. Weather in Arizona can change quickly, so pack a warmer jacket just in case you might need it, and an extra set of warmer clothes if you have room in your suitcase. If you’re concerned about the temperatures dropping, ask the manager of your rental about extra blankets or heaters. Many properties in Phoenix have fire pits and gas fireplaces as well for guest use, but always check the house rules or ask your host if you are unsure.

Don’t be afraid to reach out to your host for questions about your stay and how to get the most out of your visit to beautiful Arizona.

Looking for some local Phoenix events? Visit the Visit Phoenix page for current events around the valley.

Ready to book your next visit to Arizona? Book with us directly & save on your next trip!